Seldom do picadores get their due in bullfighting. despised by the tourists and underappreciated by the bulk of the aficion, they perform a needed task. If one dies in the ring via a fall or a goring, he is at least listed on the black chronicle of fatalities forever, which to an extent assures his remembrance. Chofer, Veneno, Jose Bruno, Pica, Tigre and so on remain some of these unfortunates.  There are others who lived and made a name for themselves, such as Sixto Vazquez, Tarzan, Venus Pacheco, Tin Tan, Jesus Gomez  and Pimpi, but again they are few and far between.

Jose Manuel Tirado of Sevilla is a picador who is gaining respect among the multitudes by plying his trade. He has also earned a spot here. He has been seen in recent years in all the major festivals and a regular at San Isidro in Madrid, as well as the annual April feria in Sevilla.

Away from the ring, he remains a modest man of diverse interests and likes to play Zoo World on his Facebook account.

Too often, the picador is ignored or unjustly jeered in the ring. On occasion, one stands out as exemplary in his work. Tirado is one such person. 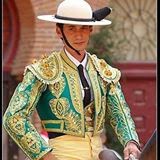