For a different look at the bullfight, meet Eztquial Vargas, otherwise known as Tin Tin.

In the style of Cantinflas, Don Gato and other comedic bullfighters, Tin Tin and his team have been making bullfight fans laugh for several seasons now.

From their Bogota base, they operate and take bookings that keep them busy everywhere. Each season sees them as regulars in South American plazas large and small.

As leader of the group, Tin Tin fights in clown make up, both on foot and in the unusual sideline of rejoneador, all with comedic factions.


Throw in an energetic group of midgets and one has a cocktail for hilarity in what is normally considered an extremely serious profession.

As of now, they continue to go strong.

Ole.
Posted by Blog taurino at 1:09 PM No comments: 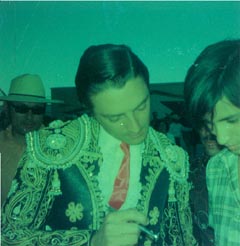 Jesus Solorzano is the son of the late Mexican matador of the same name and while he now lives quietly in Mexico City, where he still fights an occasional calf or plays polo, he had quite a run from the early 1960s to the 1990s. 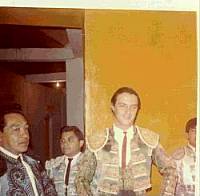 Solorzano made his professional debut both in traje corto and the suit of light sin the border town of Nogales and became a regular there throughout his career. Alternating alongside Leonardo Manzano, Robert Ryan, Mauro Liceaga, Antonio Del Olivar, El Sol, Armando Soares, Queretano, Paco Pallares and many others, he became a mainstay. He also formed a rivlary with the Portuguese, Fernando Dos Santos.

In September of 1971, Solorzano had his greatest day in Nogales and possibly his life where he cut two ears from his first bull and a hoof from his last.

Solorzano took the alternativa when in Spain in 1966, in the Barcelona bullring.

This torero had great showings in many other bullrings, includign Juarez, Tijuana, Mexicali, San Luis Potosi, Aguascalientes, Guadalajara and even Mexico City.

Mexico City was also the scene of his worst goring ever, when he took a horn in the intestines while working with the muleta. 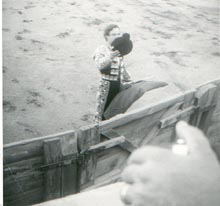 In the latter years of his career, Solorzano was part of the empresa system in Cancun alongside Manolo "Arnmillita" and Jorge Avila.

Graceful with the capote, outstanding with the banderillas and an excellent muletero, Solrozano's only flaw was occaional weakness at the kill. When on with the sword, however, he was deadly and often cut the maximum of awards. At other times, such as in Juarez in May of 1974 and Nogales in May of 1976, he gave memorable showings, yet was reduced to empty-handed laps around the ring amid applause, where he otherwise would have cut ears and tail, due to misses at the supreme moment. 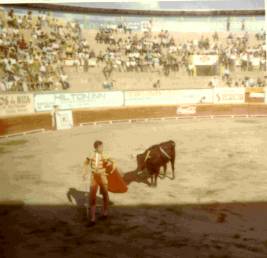 One of Solorzano's greatest final border showings came in Mexicali in 1992. Alternating with Alejandro & David Silveti, he faced an exceptionally brave bull that received an indulto or was set free due to its nobility.

Truly a class act all around, Jesus Solorzano reamins one of the most beloved of Mexican toreros to ever enter the ring.
Posted by Blog taurino at 6:37 AM No comments:

Ernesto Gutierrez
Posted by Blog taurino at 6:06 AM No comments: