With the end of the official 2013 Spanish season, a number of Spaniards have come to Mexico for the winter, as has been the case for decades.

Among the two most notable would be El Juli and Juan Jose Padilla.

Juli, now a mature matador, started as a child sensation years ago. Over the years, he has become one of the top draws in all of bullfighting. A major goring earlier this year has done nothing to damper him. In his Mexican return, he has already triumphed in Tijuana, Mexicali and elsewhere.

Also leading the list is the phenomenal Juan Jose Padilla , who lost an eye to a horn in the face. The injury that should have forced him into retirement has made him a super hero instead. Performing with a patch over his eye, his "pirate" image has caught on. people often wave skull and crossbones flags when he appears and cheer him on.

Other Spaniards are coming or already in Mexico, but these are the most noted. 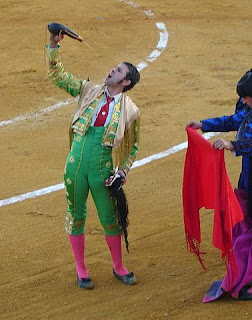 Posted by Blog taurino at 11:45 AM No comments: