For three decades, bloodless bullfights have taken place in Northern California in Escalon, Tracy, Turlock, Tulare, Artesia, Thornton, Gustine and other towns. The 2014 temporada saw a lot of action in this set of uncanny corridas in which the bulls were not killed.

In keeping with Portuguese cultural interests, most of the performers were rejoneadores fighting off horseback. Sario Cabral, Joey Correia, Tiago Pamplona and Tiego Carreiras were some of them.

Information on the upcoming 2015 temporada may be found at http://www.californiataurina.com

Correia, a Californian of Portuguese-American heritage, should be seen once again in several bullfights. A former forcado turned horseman, he has become a mainstay in these bloodless bullfights.

Rumors have it several matadors on foot will also be taking part next season, brought in from Mexico. 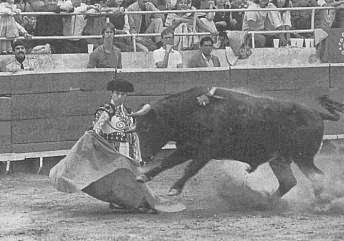