Three times in the old Nogales bullring, more than one torero ended up being taken out on the same cartel. Clearly, the ring could be bad luck for toreros.

The first time occurred in 1958 when Benjamin Lopez Esqueda was gored by a  Romeral bull while performing gaoneras in a quite. Seconds afterward, Luis Briones, depicted below, took the bull away from him and received a massive goring in the lower back that came close to killing him. Both men spent considerable time in the hospital before being brought back to Nogales for as "revenge fight" with Romeral bulls. 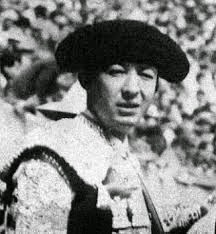 The second such incident took place in 1963, when Tomas Abaroa and El Callao were both gored, while a picador took a horn in the foot and photographer Blair Grant was likewise gored when the bull jumped the fence and caught him off guard. The third matador on the cartel, Pablo Lozano, was almost gored as well, but escaped with having his pants ripped open by the bull.

The third time took place in 1987, when Jose Maria Gonzalez "Joselito" received a serious blow to the chest in a novillada and had to be rushed to the hospital, while Silviano Tanori, who made the rescue, slipped seconds afterward and broke his arm when he fell.

With the ignorant ban on bullfighting in Sonora, the Nogales ring now sits silent. For how long is anyone's guess.
Posted by Blog taurino at 10:39 AM