The Long Day Of Revenge is an erotic fetish novel with a bullfighting theme. Do not act shocked as the bullfight has been used under similar conditions before. Remember the film, Matador, from 1984? What about the novels such as La Tarantula and Corrida Of Sin?  Most projects of this nature are not of high quality. Revenge is different. If you like the erotica in the  50 Shades Of Gray or 9 1/2 Weeks meeting Blood & Sand then you will like this. If you are offended by erotica and really hate the idea of a "dirty book" then overlook the kink and read it for the powerful bullfight aura.

Manolo Garza is injured on a ranch and develops an obsession with the calf who nearly killed him. For the next three years, as he grows in fame and takes the alternativa, he conspires for a way to face and kill this animal. Through cunning and manipulation he manages to set up a bullfight where he as lone matador faces and kills four bulls. This assures him of a meeting with his hated enemy in what is his long day of revenge.

The grand climax of the book, to make a pun, is not a sexual escapade, but a confrontation with this animal in a dramatic showdown that could rival any other film or novel.  Luis Bello  and Brujo in The Brave Bulls comes to mind.

Most suspect the matador and the bull will kill each other in the end. Manolete, Yiyo and the like? Such is not the case again!

The author also seems to be taking a swipe at the present situation in Sonora, where for whatever idiotic reason, bullfighting was banned a few years ago by the do-righters. While aficionados have been lobbying to overturn this ruling in Nogales and Hermosillo, the author ads fuel to the flames by evidently and deliberately setting his novel in Nogales.

Manolo Garza could be any new matador in real life. As far as role models for the character, he could be everyone and no one.  The bull ranch set in Hermosillo was clearly modeled after the defunct Trincheras ranch near Santa Ana. Real toreros are referenced on many occasions within the book.

The erotica comes from Garza's dominating personality and his interest in bizarre sexual acts which threaten to cost him both his marriage and his mind  Between his lust and his desire to destroy one particular bull, he is all but a  ruined man by the time the climatic corrida takes place. On the circle of sand he redeems himself. No one sees the twist ending coming.

In reality no one was ever killed in the Nogales bullring, though there were numerous bad gorings there. Briones, Miguel Angel, Tomas Abaroa, Jaime Bolanos and others came very close. The worst was to the Portuguese, Fernando Dos Santos, who took a goring in the neck, but lived.

This is a win/win situation for author D.P. Adamov. The aficionados will read the book for the bullfight theme. The fans of erotica will read it for this and probably find it different from most of their preferred reading material due to an actually original plot. ''Okay, so it might not be Currito De La Cruz, The book isn't utter garbage like La Tarantula either, where the author of this trash using an alias of Don Isidro De V*** in 1970 not only understood nothing of the bullfight, but failed to  realize tarantulas were not poisonous.

It is a pity film directors Paul Naschy and Jesus Franco are dead as either would have had a field day with this on film.

Available in book and ebook forms both. It should be stocked in numerous adult bookstores or orderable from the publisher.

Posted by Blog taurino at 4:02 AM No comments: 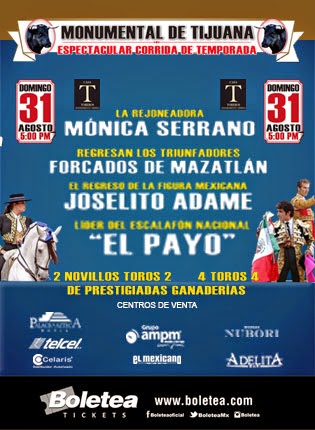 Posted by Blog taurino at 4:36 AM No comments:

Antonio Prates continues his campaign in Mexico. The young rejoneador continues in a tradition rarely seen as surprisingly very few Portuguese stars of this form of fighting bulls have ever been seen in Mexico.

On the contrary, many Portuguese toreros on foot such as Fernando Dos Santos, Manolo Dos Santos, Jose Julio, Armando Soares and more have found great success in Mexico over the decades. 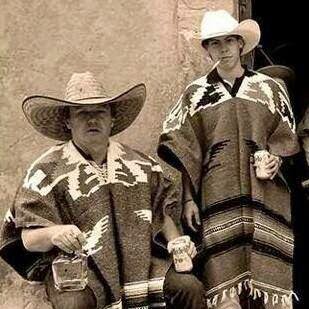 Posted by Blog taurino at 12:27 PM No comments:

The veteran toreros Zotoluco and Payo would undoubtedly be the triunfadores of the annual feria in Teziutlan this month.

Both left on shoulders after spectacular ear cutting faenas.

Zotoluco has continued to prove himself an ageless wonder, scoring triumph after triumph at an age where most matadores have long retired.

Another surprise of the feria was Fermin Rivera, the newest matador of the Rivera bloodline. He showed moments of great determination and uncanny skill for being a newer matador. He did not cut ears, but strove bravely and left an impression on the aficion. There is a desire to see him again. 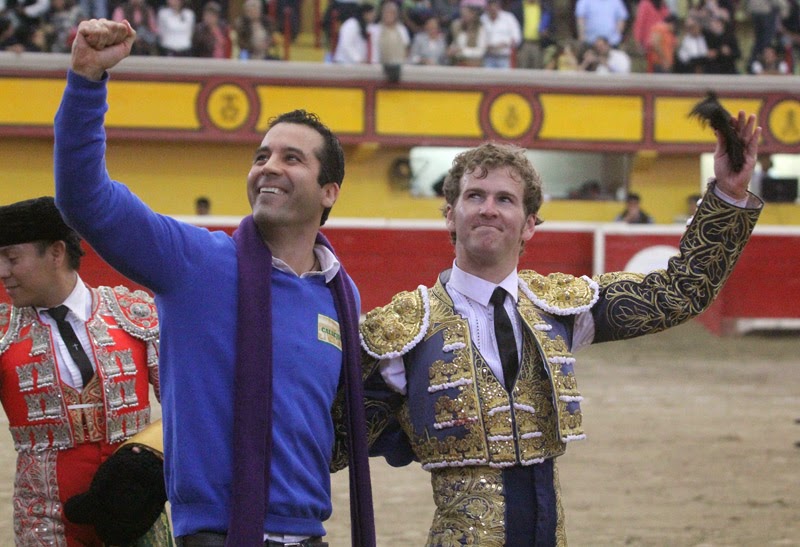 Posted by Blog taurino at 6:42 AM No comments:

Few matadors from Mexico since the days of Carlos Arruza have provoked as much interest and attention in France as has Diego Silveti.

In August, his campaign has continued in this country, along with various corridas in Spain.

The Silveti family name and tradition lives onward.
Posted by Blog taurino at 3:27 AM No comments: