The Strange Death Of Gil Chacon

The bullfight world has seen some strange things happen, surrounding both life and death. One of the strangest was the demise of the ill-fated novillero, Gil Chacon.

Chacon was a torero of modest ability, reputably capable, but not spectacular in the ring and by no means a pending fenomeno. He owes his fame more to the uncanny way in which he died, as opposed to how he lived or whatever he accomplished in the ring.

In 1935, in the province of Malaga, he died from injuries received in the ring, but not from a goring.  As he attempted to get away from his novillo during a difficult moment in the faena,  he was slightly tossed and jarred, but managed to impale himself on his own sword.

The bizarre death due to blood loss was somewhat similar tot hat of a matador de toros many decades ago, by the name of Jose De Los Santos, who likewsie managed to put his own sword through his leg as he attempted to jump the fence to escape hsi toro, with loss of blood  being the culprit for his  death. 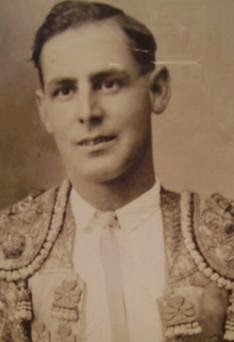