Started by the Labastida family in 1926, just after the Mexican Revolution and its horrors finally faded from view, Santo Domingo has long been a favorite of modern and earlier Mexican toreros. The ranch is located in San Luis Potosi. While so much attention is placed on the torero any more, it is time to make mention of the other very important protagonist int he bullfight and that being the brave bull.

Antonio Lomelin had one of the greatest afternoon of his life with an animal from Santo Domingo, where he gave a tremendous faena and cut ears and tail in Nogales.  On this cold and gloomy day, the matador from Acapulco rose to the opportunity this toro de bandera offered and excelled in all phases of the lidea. capote, banderillas, muleta and sword were perfect, with the bull aiding him all the way.

Paco Camino likewise gave a glorious faena to one of these animals during a Mexican tour. The Spaniard won ears from his brave beast.

A bull from Santo Domingo also came close to killing the Portuguese matador de toros, Fernando Dos  Santos, when after delivering a number of tossings without consequence, it bowled the man over and delivered a goring in the neck. The horn missed the jugular and a fatal blow by just fractions.

Later, Dos Santos would take great pride in showing off the scar on his neck to any aficionado who would look, as if to emphasize his brush with disaster, compliments of the horns of a Santo Domingo. 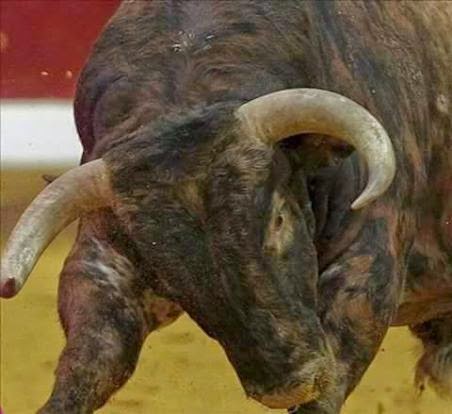