This marks the 14th anniversary of the death of ill-fated Spanish matador, Julio Robles, one of the most versatile and perhaps underrated of modern toreros.

Robles was not killed by a bull, essentially, but he was placed in a  wheelchair and partially paralyzed after a cojida that broke his back. Being wheelchair bound and the conditions surrounding this certainly did, however, contributed to an early death. The bulls did not literally kill him, but their doings put him in the situation that ultimately took its toll.

Robles was perhaps one of the most beloved of matadores in the 1980s. 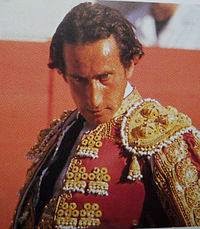