The Bullfight As Erotica

There has been some controversy over the recent D.P. Adamov book, The Long Day of revenge, which while a great bullfight tale on one hand, is ripe with erotica offensive to some. Information on the book may be found at http://www.pinkflamingo.com and the author's Blog page is at http://www.inkyass.blog.com

Criticism oft he book may be overdoing it when knocking the weird S/M features and sex scenes. granted, they are plentiful, but it is not like a first here.

In any case, these films offended plenty and the offense helped the producers make money. Everyone bitched about them, but subsequently wanted to see them.

Then we have the "dirty books tore" books of the 19690s and 1950s such as Corrida Of Sin, Matador Of Shame, Manana, El Cordobes and the worst oft he worst, La Tarantula, in which the author sued the bullfight as a sub theme while nothing about it made sense and even made the glowing error of assuming tarantulas were poisonous when they were not.

But, sex and controversy makes for sales. 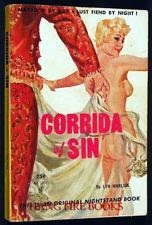