Also from Monterrey is a promising novillero, Cayetano Delgado.

Delgado has also been seen within the Mexican interior on a regular basis recently. He had a novillada in Saltillo a while back that was well received.

There are, as always, a number of confident new toreros on the scene right now. How many of them will make it to the top sir always speculative, but Delgado has the willingness, courage and ability to do so.

Keep an eye on him. You may soon see great things. 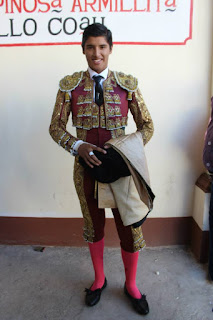