One of the most dreaded incidents in bullfighting traditionally comes when damage is done to the big femoral artery in the leg. Many toreros, even in relatively modern times, have died due to this artery being nicked, let alone severed. Blood loss is tremendous and the shock that follows alone may prove fatal.

"The femoral is just one artery and you can fix that if you catch it quickly," remarked the late horn wound specialist, Jimenez Guinea. "The real problem comes when you get a  wound in the cluster of arteries and veins in the groin."

Still, history is full of toreros killed by a wound of this nature. Jose Falcon, Manolete, Rafael Carbonell, Angel Soria, Paquirri, Jose Mata, Paco Pita, Joselillo and many others attest to this.

Others such as Canitas, Maletilla De Oro, Curro Ortega, Chavalo,  Rocky Moody and Tato either lost a leg or at least were so hampered by circulation problems, they were forced to retire from the trade

In the past few decades, the survival rate has been much better. Jose Tomas, Marcel Herce, Arturo Magana, Antonio Rojas, El Soldado, Manolo Dos Santos, Pepe Luis Vargas and Curro Sierra all received wounds had damaged the femoral in one way or another, but lived.

Still, nothing draws more concern from the press the aficion or most medics than to have a man carried into the infirmary with a goring of this nature. 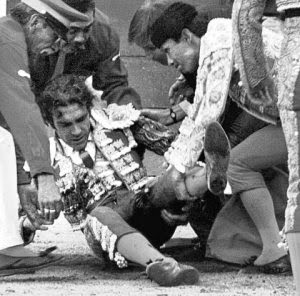