Tijuana has seen many bad gorings over the decades in its varied rings and one death, when Chinanas was killed long ago. Other major gorings  include those to Fabian Ruiz, Chilolo, Adrian Romero, Sidney Franklin, Antonio Lomelin, Curro Vazquez,  Miguel "Armillita" and Alberto Ortiz, just to name a few.

One of the worst and most needless of gorings came in September of 1971, when Arturo Ruiz Loredo was on a card with Cordobes and working hard to impress the public of his own  worth.

As  he summed up his faena, which consisted of far more nerve than art, he did an adorno, performing the telefono, where he rested his elbow on the bull's head.

Then, as he completed the adornment, he arose and started to walk away, when he accidentally bumped the bull on the muzzle with his arm.

The indignant toro charged and gored him  at short range, catch him in the intestines with  a wound remarkably like the one that killed Joselito in Spain  in 1920.

Had the goring taken place  in  the 1920s and not 1971, Loredo would have joined the famed Joselito on the black chronicle of bullring fatalities for sure. While his condition was muy  grave for a while, he did recover, though he missed bookings in Nogales and other places in the meantime. The Portuguese, fernando Dos santos, filled in most of hsi adtes while he recovered from the severe wound.

The point is, as in many cases, carelessness  nearly caused the torero to lose his life. 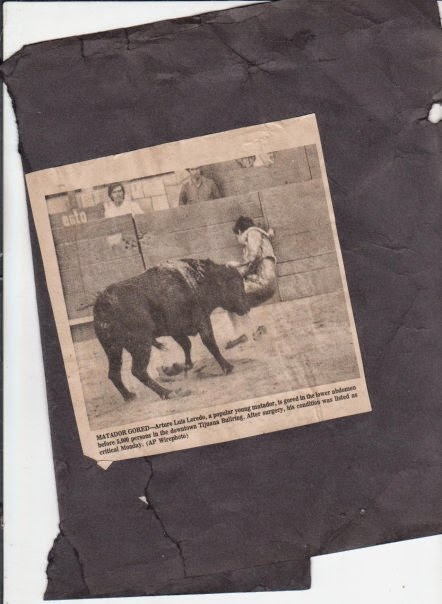