Manolo Arruza was a figura in the Mexican rings for many decades. the son of the even more legendary Carlos Arruza made his mark in both Mexico and Spain as an outstanding torero, capable in all acts of the corrida.

There was another Arruza, brother to Carlos and uncle to Manolo, who remains the forgotten Arruza.

Carlos and Manolo Arruza started as teenage bullfighters under the tutorship of Samuel Solis. Carlos went on to take the alternativa, become a maximum star on foot, retire and return as a rejoneador, before dying  in a car wreck in 1966.

Manolo Arruza, his brother, never made it tot he alternativa, as he was killed  in a hunting mishap before the ceremony could be performed.

Due to this fact, he has become overshadowed by his brother Carlos and his two sons, Manolo and Carlos Jr., in the ring.

Manolo was not without talent. As was the trademark with the Arruzas, he was magnificent with the banderillas. He was considered a bit weak with the capote, but a good muletero with the smaller lure.  He was also a decent killer when it came to delivering the sword.

How far Manolo might have gone, had he lived to take the alternativa and become a matador de toros would be anyone's guess. History denied him the opportunity and his premature death cut short a promising career. 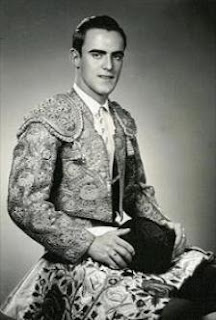