Silviano Tanori, from Nogales, started as a student of Chilolin and while he never took the alternativa, has a long career as a novillero.

Among his many attributes, Tanpri was especially killed with the banderillas and the placing of cortos, where he broke off the hafts to shorten them and make the danger paramount.

Tanori had particular cartel in his native Nogales, where he alternated with Armando Moreno, Chilolo, Manolo Ramos, Jose Gonzales "Joselito" and Carlos Gonzalez on a regular basis.

One of Tanori's best afternoons came in 1993, where he cut an ear after the faena of a lifetime, losing a tail when the bull was slow to di. Though the single ear was his prize, his work with the muleta that day was emotional and artistic.

Though officially retired as a novillero, Tanori still makes appearances occasionally as a practico in festivals. He makes his home in Nogales, Arizona, across the border from Mexico. 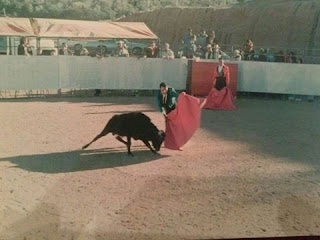