While Ronda is said to house the oldest plaza de toros, technically this honor should belong to Nimes, France, where the bullring is built within an ancient Roman theater.

Over the decades, the sands have seen great showings by many of the legendary toreros. Paco Camino, Dominguin, Ordonez, Gallo, Samchez Mejias, Belmonte, Manolete, Carlos Arruza,  Curro Romero, Manzanares, Litri and many more had great days here. El Fundi had more cartel in this ring and in France in general than he ever did in his native Spain.

The official season for Nimes runs from March to September, with corridas held at varied intervals.

As noted, the ring itself is a sight to behold.

Nimes. The cathedral of bullfighting in France. Nimes. The gem of the French fiesta. 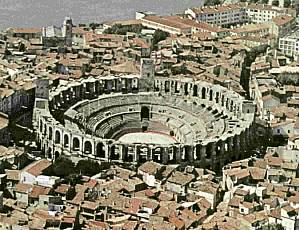