A charismatic matador de toros who overcame a near-fatal bout with hepatitis, multiple gorings and many political enemies behind the scenes of the bullfighting world, Guillermo Carvajal came from Durango, Mexico to become a popular figure in the 1950s through the 1960s.

Carvajal was known for his skill with the capote and muleta, though his kills were inconsistent. He placed the banderillas on very rare afternoons , when the mood fit him. 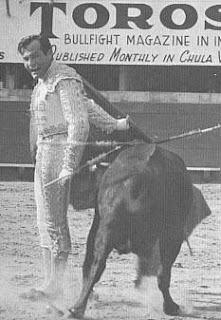 Though never a true figura, Carvajal found success in both mexico and Spain. He received the alternativa in the old wodoen ring in Mexicali that was there before La Calafia and utlimately burned down. The ceremony took place in 1953 with Pepe Dominguin and Humberto Moro bestowing the honors.

The ritual was confirmed in Mexico City  at  the hands of Calesero.

The next season saw him tour Spain, confirming his alternativa in Madrid at the hands of Antonio Vazquez and Mario Carrion.

In 1961, Carvajal was prominently featured in  Ann Miller's difinitive bullfighting book at the time, Matadors Of Mexico. He was also noted in the works of Cossio.

During the 1960s, Carvajal slowed down considerably due to the gorings,   the deterioration of his health and a series of injuries to his hands which further hampered him with  the kill. He eventually retired from the ring, but lived long afterward and finally passed away in 1995.

During his long career, Carvajal offered many respectable showings when he returned to Plaza Mexico. He also had continual success in the Mexican border bullrings. Tijuana, Nogales and Juarez were three of the cities where he held great cartel. 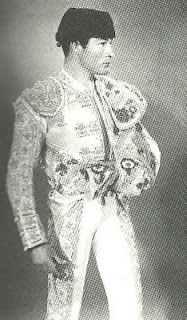