The Plaza De Toros La Esperanza in Chihuahua, Chihuahua Mexico saw inauguration in 1965 and has remained a hot spot for bullfighting in the nrothern part of Mexico for decades. Aside of corridas and novilladas, the bullring has held concerts, wrestling, boxing and other events.

Sadly, int he past two years or so, corridas have been few, but hopefully this will change and once again La Esperanza will see loads of action.

Over the years one of the all-time favorites in this ring was Raul Contreras "Finito" and this stood to reason as Chihuahua was his home town. A valiente known for more nerve than grace, he was nonetheless a top draw in this bullring, where he appeared numerous times. Finito was especially known for his skill at the supreme moment and seldom required more than one entry with the steel to finish his work.

This came to an end in 1974, when Finito died following a car crash.

Others excelled in La Esperanza as well, including Manolo Martinez, who proved before crowds here that his reputation was deserved.

Eloy Cavazos also showed his mastery with the muleta and the sword on varied occasions.

One of the underdogs who also turned in outstanding afternoons in Chihuahua was the diminutive Ernesto San Roman "El Queretano who proved himself the mighty mite of Mexican toreo. Exciting the aficioandos with his faroles de rodillas and insane capote passes set the stage with him, to do great banderillas work, equally reckless faenas and usually, quick kills.

Curro Rivera turned in one of his legendary faena in a corrida alongside Manuel Capetillo hijo and Benjamin Morales.  On this day he cut ears and tail, while Capetillo was applauded and Morales was gored.

The ill-fated Minuto also left a great impression on the Chihuahua public prior to his untimely death from kidney cancer when he was still in his 20s.

In the 2000s, Oscar San Roman, the nephew of  Queretano, was one of the favorites in  this ring. 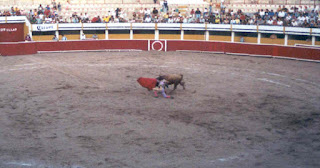