Cristian Valencia comes form a family of Venezuelan toreros and in his own right  made waves as a novillero. On the rise and gaining an international reputation for himself, he has proven to be complete in all phases of the bullfight.

Not only has Valencia found success in his native Venezuela, but has also triumphed in Ecuador. A trip to Spain also saw him gaining success with special note in regard to a triumphant novillada in Algeciras..

Valencia remains especially talented with the banderillas. he has gained such a reputation for placing the sticks that in rings where he chooses to leave the handling of the barbs to his banderilleros, protests grow until he is forced to take the sticks himself in his usual form.

He has developed a reputation for the el quiebro method of placing the sticks, where he allows the bull to come to him rather than running toward it and the placing of the cortos, breaking down the shafts to make the danger paramount.

Keep an eye on Cristian Valencia, as he is a rising star. 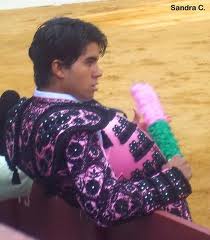