A fiery matador de toros, Rafael Ortega was born in Apizago in 1970. He took the alternativa in Puebla in 1991 at the hands of Manolo Arruza and David Silveti. This was confirmed in Mexico City in 1993 via Geno and Pepe Luis Herros, then finally in Madrid in 2001 with Leonardo Benitez and Ruiz Manuel.

A complete torero, though sometimes criticized by the purists for overdoing the kneeling passes and adornos, he has nonetheless captivated the Mexican aficion. He is skilled with the capote, especially showy with the banderillas, capable with the muleta and more often han not a good killer.

Though he has done well in plazas large and small, one of his greatest showings would arguably have been in his lone appearance in the Nogales bullring, on the Mexican border, where in 1995, he registered the maximum of triumphs. In a spectacular corrida he and Leonardo Benitez cut ears from all four animals. This was considered to be one of the single greatest corridas in the history of this ring. Both matatdores excelled with banderillas, muleta and sword, creating spectacular faena after spectacular faena.

On the border, Ortega became a regular in Tijuana and Juarez, where he gained spectacular cartel in the 2000s.

Again arguably one of his best Tijuana showings came while alternating with Pablo Hermoso De Mendoza and Zapata. Though he cut no awards due to problems with hes word, the faena to his second bull of the afternoon was sine of his best. had he not missed with the steel he would have surely gained a tail (which Mendoza did cut, while Zapata won two ears) 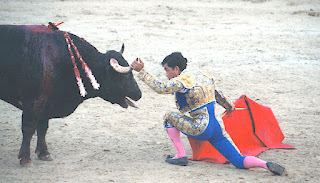 Willing, dashing and complex as a torero, Rafael Ortega has made a name for himself in his native land as well as other parts of the world. Other Mexican rings over the years where he has triumphed in one degree or another include Morelia (where he won the Golden Sword trophy n a competitive corrida), Motul, Villa Alvarez, Aguascalientes, Puebla, Leon, Guadalajara, Monterrey and San Luis Potosi, just to name a few. 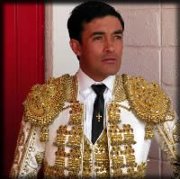