On March 4 if 2012, Padilla returned to the bullring just  months after the goring in the face that caused him to lose vision in his left eye.

With a patch over his eye and looking like a pirate in a traje de luces, he showed he had lost none of his previous courage since this goring obtained when he slipped placing a pair of banderillas.

Padilla demonstrated his trademarks of old, including placing the sticks again and the execution of his kneeling passes with the capote.

In the end he left on the shoulders of the crowd.

Not much more to say on this blog.

Padilla has spoken for himself. 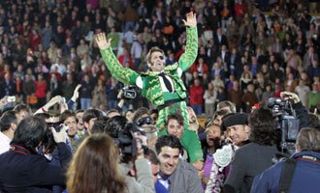