This American novillero who got is start by jumping into rhe ring as an espontaneo and trying to cape a bull belonging to Rafael Rodriguez, was known for crude valor, but a lack of knowledge of terrain came back to haunt him. Ironically enough, it was Rodriguez who later helped to train him fro action, in spite of their questionable first meeting and help him gain some contracts.

Moody was especially stylish with the banderillas, but so-so with the capote. he was frightening with the muleta and prone to passes on his knees that showed more raw nerve than control. Yet his courage was one of a do-or-die nature and he was determined to succeed or be gored in the process. Sadly. it was the latter in Juarez that ended his career in 1958.

The torero had been better than average with the capote, had placed the banderillas with his usual flash and predictably, started his faena on his knees by the fence. As he arose, he took the bull standing with a few testing muletazos and was gored in the groin.

Damage to the arteries and blood loss was so severe, his leg had to be amputated.

Not to be outdone, Moody did the incredible. he attempted to return to the bullfight and perform while walking on an artificial leg.

His labors were appreciated, but not successful and he had to call it quits for good.

He retired to Texas and lived there until 1991, when he died from a  heart attack. 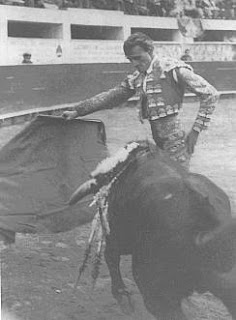