The Death Of Granero

It was in May of 1922 when Manuel Granero appeared in Madrid alongside De la Rosa and Lalanda. Already expected to replace the dead Joselito as Spain's top matador, the Valencian was capable with capote, muleta, banderillas and sword. He was the one the people had come to see, though the afternoon was filled with ill omens.

Granero had been plagued with dreams of received a bizarre goring through the eye and dying in the ring. He had been warned by fortune tellers of signs of pendign doom and had even been instructed not to go to Madrid, which in true torero form, he ignored. His head banderillero, Blanquet, had claimed to smell funeral candles where they did not exist, just as he had done before Joselito died in 1920.

Yet all seemed to be going well. Granero was applauded with his first bull, losing awards only because when he made his first entry with the sword, the blade struck a banderilla shaft and caused him to miss.

With the second bull he faced, Granero seemed confident. He had been applauded with the capote and started his faena with the pase de la muerte by the fence. It was then the animal gored him in the leg and threw him against the wooden barrier where he was trapped.

Granero's nightmare came to life, as the bull drove a horn into his face just below the eye and into his brain.

The matador was dead by the time he reached the infirmary. 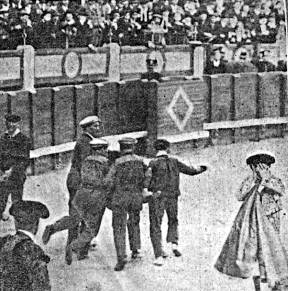 The bullfight world was thrown into mourning,. Pasodobles appeared. singing lamentation in regard to his passing. He was buried beneath an elaborate tomb in Valencia, depicting his body benign taken to heaven by an angel. The black & gold suit he wore the day he died is on display at the bullfight museum in Valencia. Countless books carried photos of the goring and tales of his demise,. He is still recalled today in modern works. Books and DVDs still deals with his downfall,

Manuel Granero is remembered both for how he lived and how he died. 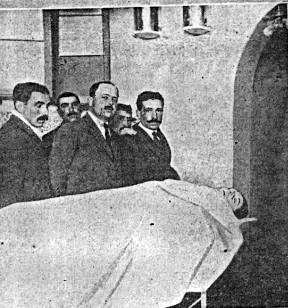