Luis Miguel Gonzalez "Dominguin" was born in Spain in 1925. Fighting bulls from childhood, he took the alternativa in 1944, confirmed it in Madrid in 1945 and went on to ebcome one of the all time greats in bullfighting. The tradition was in his blood as the brother and son of toreros.

Tradition has perhaps unfairly branded him as the villain who helped push Manolete to hsi death in the infamous  1947 duel to end all duels in which he shared bill  with the legendary Cordoban and watched him receive a fatal goring in the groin.

In truth this bullfight was just a routine corrida geld in a  routine fair, made famous because of the way Manolete  died. It was not a bullfighting equivalent to teh final gunfight with lee Van Cleef, Eli Walalch and Clint Eastwood in The Good, The Bad & The Ugly, but just another affair, though Dominguin was bent on upstagign his older rival. He and Manolete had met in other encounters beforehand and were set to appear with each other in the future, which was of course eradicated when Manolete died, making Luis Miguel the new number one by circumstances out of his hands.

In the decades to follow, Dominguin would become legendary for his exploits in the ring and his affairs with female movie stars outside of it. As he aged he would endure the competition of younger challengers, just as he had done with Manolete in his youth. He woudl retire and return to the ring at varied intervals. He woudl evens ee action in Yugoslavia in specie bullfight exhibitions. He would design his own suits of light..

Dominguin would play a bullfighter in Around The World In 80 Days and himself in the lesser known A Picasso Summer. He would serve as the prototype for the villain in Conrad';s Matador and Viertel's Love Lies Bleeding. He would be documented in countless videos and books about the bullfight. He and his then brother-in-law Antonio Ordonez would be the focus of Hemingway's Life Magazine, A Dangerous Summer, which would later be turned into a book. His own autobiography would appear in the early 1970s, titled Dominguin. He even made an appearance on What's My Line when making a trip to New York.

The legend came to an end in 1996, when Dominguin died following a stroke.

He rests within the Cementerio San Enrique in San Roque, Spain. 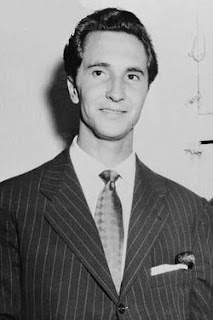