He is still with us, though he has not fought bulls professionally for many years. That is up to his son, Gaston Jr, now. Gaston Sr devotes time to the family ranch, raising horses and bulls in the Mexican province of San Luis Potosi.

From the 1950s into the 1980s,  Santos was considered Mexico's best rejoneador and one of the top toreros off horseback in the world, appearing in both Spain and Portugal as well. He likewise starred in a number of Mexican movies.

During a long career, there were many great triumphs for this torero, but also some truly bizarre incidents, such as what happened in the old Nuevo Laredo bullring. Facing a cowardly bull which jumped the fence several times to try to escape rider and horse was a difficult task enough as it stood, but the animal, already judging its distance, had one more plan in mind,. Giving the wildest jump of all, it not only cleared the fence, but the passageway all together, landing in the stands. No one was killed in the mishap, but many fans  were injured. One of the other matadores on the card, Rafael Rodriguez, actually followed the beast into the seats and put it to death it there with a puntilla.

Santos was a mainstay in all of the major Mexican plazas and many minor ones,. Mexico City, Juarez, Tijuana, Piedras Negras, Guadalajara, Aguascalientes, Matamoros, Nuevo Laredo, Nogales and Monterrey were a few of them.

The odd thing was Santos did not seem to like killing off horseback as much as he did on foot. Usually he would make a token entry with the rejon of death, dismount, take muleta and sword and kill with the dexterity of a Manolete.

One of many great showings along the Mexican border saw him kill in just such a way in Nogales, while alternating with Mario Coehlo of Portugal and facing bulls from his own ranch in 1977. He gave a superior presentation of mounted bullfighting, killed on foot with a  demolishing sword thrust and cut two ears.

Santos remains a remarkably sophisticated and educated man, who by the way, speaks eight languages 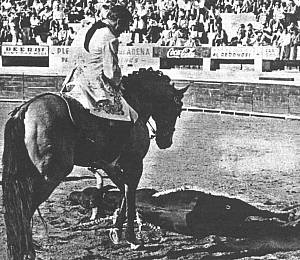