In the 1970s, Miguel Cepeda "Breco" was a popular matador de toros, especially noted for his work with the banderillas. He was also one of the best and fastest of killers when delivering he sword. A number of near-fatal gorings hindered his career greatly, but he nonetheless became a popular and much loved torero in the Mexican plazas. He left his mark, to be certain.

Now enter a new El Breco in the form of Rodrigo Cepeda "Breco" who is carrying on the bloodline and family tradition.

In true "Breco" form he is noted for his work with the banderillas, placing his owns ticks with style and originality.

He likewise carries on the tradition of opening most performances with a frightening farol de rodillas on his knees before going into more artistic work with the capote.

With the muleta the new El Breco shows a proper balance between artistry and valor, giving all the aficionados a little of what the look for.

Like Miguel "Breco" before him, Rodrigo is also a capable swordsman with the kill. 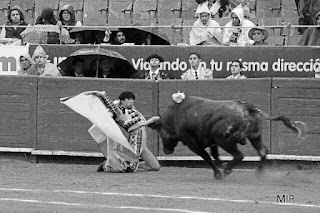