Uriel Moreno "Zapata" remains one of the foremost veteran matadors in Mexico today, taking his alias from not the revolutionary, but Emiliano Zapata, the town in Mexico where he was born in 1974

After a sensational career as a novillero, Zapata took the alternativa in Puebla in 1996.

The ritual was confirmed in Plaza Mexico in 1999 at the hands of Rafael Ortega and Uceda Leal.

Zapata has triumphed constantly throughout Mexico, but some of his strongest showings have been in the north in Hermosillo, Nogales, Juarez and especially Tijuana. In this last plaza, he has been a regular favorite , with one of his greatest showings coming several years ago in a corrida with Pablo Hermoso de Mendoza and Rafael Ortega. While Mendoza won top awards with his second bull and cut a tail, Zapata cut a pair of ears from the final bull of the day.

Though capable in all parts of the corrida, Zapata has especially become known for his work with the banderillas, especially the cortos where he breaks down the shafts to increase the danger. He is also known for the odd "violin" maneuver where he spins and places the banderillas over a shoulder, with his back to the animal.

Over the seasons he has come to be regarded as an integral figure in modern Mexican bullfighting. 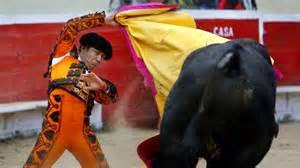