Not a bullfight movie, but with bullfight footage of sorts. This is a western film set in the Mexican Revolution, starring Franco Nero, Jack Palance and Tony Musante. Brilliant direction by she late Sergio Corbucci and magnificent music by Ennio Morricone.

The film deals with the adventures and double-crosses in a relationship between a Polish gunfighter played by Nero and a reluctant revolutionary played by Musante. Jack Palance is the villain out to kill both.

The bullfighting comes in when on the run, Mustante and his gang are hiding out as comic bullfighters.

This leads to a bizarre gunfight with Palance and Musante squaring off, with Nero looking on and the music from Morricone's duel theme blaring louder than any pasodoble.

Palance is killed in this in-ring gunfight and his death scene is priceless.

Though not a bullfighting film by any means, the brief comedic bullfight clips and of course the gunfighting scene in this plaza de toros are worth a look.

As far as westerns go, this is a pretty good movie also.

The film has been released on dvd as The Mercenary and also in composite sets under a number of different titles. 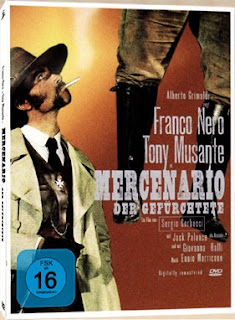