The Death of Patricia McCormick

Patricia McCormick, an American female bullfighter and pioneer in the fight toward recognition of matadoras has passed away. Though she was never able to take the alternativa, she helped paved the road for recognition of females in the plaza.   .

In the 1950s, McCormick was a draw in Mexico and especially the border area. Though she escaped fairly well unharmed in the trade, she did take some gorings, six in all, including two big ones and was also injured rather badly in Nogales, when she cut her hand on her own sword.

Her exploits may be read about in the book, Lady Bullfighter.

Though long out of print, this book may still be found in some libraries, rare book stores and online.

Critics from the time who her in action were usually impressed with her style. Much like Conchita Cintron, another pioneer for women in the ring, she was said to be able to give her male counterparts a run for the money on the sand. 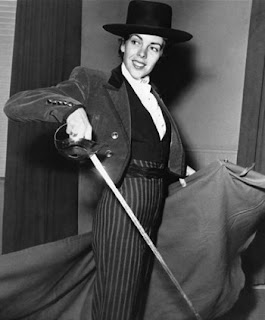