Death surrounded Carnicerito De Mexico. In 1940, he was the testigo when Andres Blando took the alternativa in Mexico City and Alberto Balderas received a fatal goring in the stomach.

Carnicerito also received goring after goring himself, including one major wound in the shoulder and another serious set of contusions in Mexico City when slammed against the fence as he executed his specialty, placing the cortos or broken banderillas.  In a corrida alongside Manolete and Domingo Ortega in Spin, he also took a potentially devastating goring in the leg. Such was the case for him, as he skirted death over and over.

Carnicerito's luck ran out in Vila Vicosa Portugal in 1947, a few weeks after Manolete's death.  As h did the pase de la muerte against the fence, the bull slammed into him, lifted him and dropped him tot he ground. The injured matador evidently landed on his feet and was able to jumbo the fence to safety before realizing just how large a wound he had taken.

The matador was carried by ring workers and aficionados physically down the road to the hospital and there, some time after, he died.

The matador seemed convinced that he had been chosen to relive Manolete's fate, insisting his wound was identical to Manolete's, which it was and as such he was doomed to die. In his final moments, he even mouthed Manolete's well known last words, just before expiring.

With his last breath he lamented that he was going to die far away from his beloved native land. Crying out for Mexico he then passed into legend.

In the ring, Carnicerito was known as a somewhat graceless, but daring torero who took great risks. He was also known as a master of the banderillas. Whenever he appeared to allow his banderilleros to carry out this task, fans would generally protest until he took the sticks himself.

The man's death was well documented in Conchita Cintron's Memoirs Of A Bullfighter and in Cornadas by Jaime Palacios. 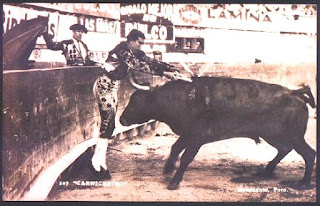