Book Review: What Is Bullfighting

This is a small book written by matador Diego O' Bolger, now hard to find, but popular in the 1980s. It was sold at bullfights in Nogales and Tijuana.

Though unspectacular, the book does offer a simple explanation to the phases of the bullfight and enables people watching a corrida for the first time to understand what is going on.

O' Bolger took the alternativa in Tijuana in 1968. He is presently retired and living in Tucson. During the 1970s and 1980s, he had many triumphant corridas on the border, especially in Nogales. 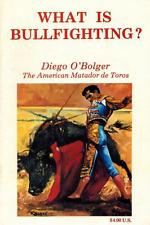