The capable banderillero, Victor Miranda died in Mexico from natural causes some months ago, without much fanfare. While his death was reported in the Mexican papers in some places and online, it was fairly ignored by the mainstream.

Miranda could well have  been one of the shortest toreros in modern times, being around five feet high. In spite of this, he was quite long on valor. 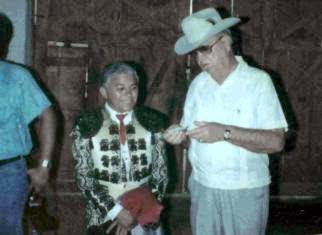