A Second D.P. Adamov Book Coming With Bulls Within

A second book by the ultra-weird yet dynamic fetish writer, D.P. Adamov, will emerge again from http://www.pinkflamingo.com. This will be released in December.

Storyteller, an assortment of sexual tales not for the reserved, will be the next creation Adamov offers his/her (no one is sure about the mysterious individual) writings. In this, a series of uncanny horror stories with strong sexual overtones will be presented and this time, another bullfighting theme in the form of The El Toreo.

The tale involves a fictional female bullfighter returning to San Luis Rio Colorado across from Yuma, Arizona, where the El Toreo is being torn down. Here, reality stops, for in truth the real San Luis Bullring was active before the time setting of  the story, from the 1950s through the early 1970s and was condemned long ago. In this segment, however, history re-invents itself and the San Luis bullring remains a focal point into modern times. Nonetheless, it makes for an entertaining story.

In the El Toreo section, a female bullfighter, long retired, comes to the old bullring not just to relive her past, but to commit suicide by jumping from the top of said ring. She is stopped at the last minuet by the ghost of a matador lover, who died in that plaza from a goring beforehand.

Dramatic and sensual fare to be sure, but again not historically accurate. While the San Luis arena did see some grand corridas in the 1950s, no one was ever fatally gored or even severely gored there.  Adamov seems to be using Sonora for the basis of his/her stories with a fixed agenda and vendetta against the green party that ushered in an unpopular ban on bullfighting a few years back in Sonora. The author seems to be using Nogales, San Luis, Agua Prieta and the like for a number of tales in hope of both reviving an interest in the area and getting people off their asses to force an overturning oft his ban.

The earlier and controversial The Long Day Of Revenge by the same author and also released by Pink Flamingo, places a focus on Nogales and Agua  Prieta.  The bullfighting content is far more direct in this novel, where in Storyteller, the bullfight shows up in this lone story, amid a number of other horror based takes.

D.P. Adamov does have a blog at http://www.inkyass.blog.com but refuses to give interviews, does very few public appearances and has yet to be photographed.

More information on this book will come as details emerge. 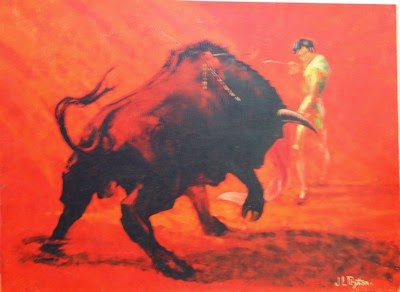