When  the Manolete movie came to dvd and was first seen in the USA as The Matador's Mistress, I was excited. After I saw this film, I was rolling my eyes at the countless mistakes made in the film.  Now I know the movie worlds embellishes quite a bit when it comes to real-life people, but I expected something a little more accurate.

This movie, however, sold me on one actor I had not heard of named Nacho Aldeguer, Since this time, I have noted his rise in popularity in his native Spain and am glad to see it. He has been involved in both music and a number of other movies since the Manolete project.

When I first saw him as Luis Miguel Dominguin I was counting this up to bad casting thinking of how he was much too short to be the cocky matador. After all, if I recall properly, Dominguin was  taller than me, which would have pout him at really close to six feet in height.

Then Nacho smirked on camera as he mad the paseo in what was supposed to be the fatal day where Manolete was gored to death.

The mannerisms were perfect.

The real Dominguin had a particular arrogance about him that for all practical purposes was impossible to duplicate.

Yet Aldeguer did so.

Hi performance was one of the redemptive parts of the movie.

Since then, he has continued to rise in popularity with the Spanish audience.

But no more bullfight films as of this date.

Hey, if anyone wishes to make my bullfight/horror film Toqueme la Cancion de la Muerte to film form the book, as the late Armando de Ossorio wished before he died, Nacho would make a great Jaime Sublaran. 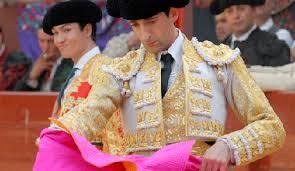