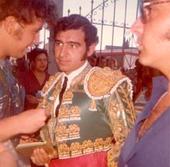 Manolo Martinez was born in Monterrey and rocketed to fame after an outstanding series of novilladas in Guadalajara and other locations. He took the alternativa in his home town at the hands of Lorenzo Garza and Humberto Moro.

Spain, however, was a disaster for him and a land he could never really conquer. Though he managed triumphs int he smaller rings, he also received major gorings prior to the confirmation of his alternativa in Madrid. This much-hyped ritual at the hands of Viti and Linares was a complete disaster. His normally fluid capote and muleta work was flawed and his kills were horrendous. After this appearance, Martinez annoucned he was leaving Spain and would never be back.

In Mexico, he was regarded as one of the all-time greats. He appeared on the card Plaza Mexico countless times and cut awards, including incidents where he acted as lone matador, facing six bulls. Guadalajara, San Luis Potosi, Aguascalientes, Chihuahua, Toluca and other interior rings were locations for multiple triumphs. 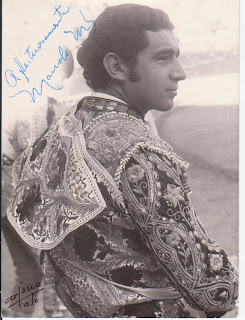 The Mexican border became the location of many grand performances as well. Tijuana, Mexicali, Juarez and Piedras Negras were plazas where hew as seen again and again with great results.

In 1970, Martinez gave two phenomenal showings in Juarez, In one he cut ears, tail and hoof and in another he left on shoulders where again, he acted as lone matador, killing six bulls himself. That same season in Tijuana, he cut ears and tail while competing with Victoriano Valencia and Arturo Ruiz Loredo.

May of 1974 saw Martinez gave one of the most glorious performances of his life, when returnign to Tijuana to compete with Ruiz Loredo and Curro Leal. Failing with his first bull and seeing Leal cut ears from his first animal stemmed an urge to triumph in Manolo, who cut ears and tail from his second.

During the years to follow, Martinez would retire once, make a comeback and then retire again. He was reportedly speaking of a third return to the rings when he suddenly felt sickly in 1998. It was discovered he had cirrhosis of the liver, a diabetic problem and a damaged heart. He naturally curtailed plans for a comeback and engaged in a bitter fight to stay alive. Sadly, he passed away in San Diego, California, while awaiting a heart transplant.

A gigantic statue depicting the matador in action stands in front of Plaza Mexico where he filled the ring so many times. His ashes are entombed within this monument.
Posted by Blog taurino at 12:21 PM