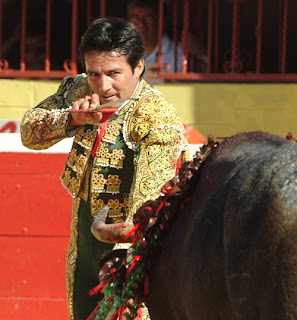 From a promising novillero in the 1990s to a highly-regarded matador in the 2000s, Fermin Spinola has made the grade in the Mexican rings.

Spinola took the alternativa in San Luis Potosi in August of 2000 and int he ten years that followed he fought 179 corridas, cutting 272 ears and 10 tails. he also faced two bulls that received indultos or pardons and were set free.

Since then, he has continued as strong as ever.

Tijuana has been the scene of some of his best showings along the border in recent years, as well as Juarez, though he has offered triumphs in many interior plazas as well.

Like many great Mexican toreros from the past such as Calesero, Arruza, Procuna and Leal, Spinola has proven himself versed in the placing of the banderillas.  He has frequently tried the dangerous el quiebro method of placing the barbs, where he lets the bull come to him rather than running toward the animal. 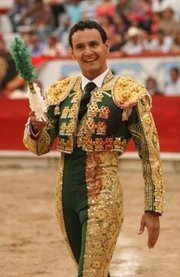