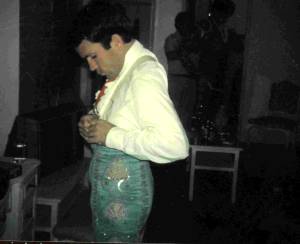 Ernesto San Roman "El Queretano" was an extremely short person in height, but long in courage. Coming from Queretaro, as his name suggests, he was recognize dearly on for having nerviness few could match. One of his trademarks was to take the bull on his knees, directly in front of the toril, while barely giving the bull room to pass him. At times he worked, but at other times it did not, as in Nogales in 1971, when he was tossed completely over the fence by a bull from Gustavo Alvarez. 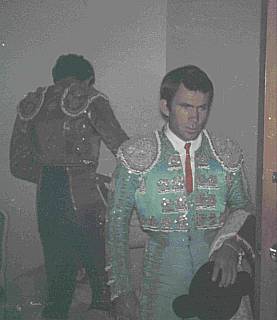 Queretano received numerous gorings in his long career, butt he worst came in Acapulco in 1972, when a horn caught him in the intestines and stomach. This was the closest he came to dying and he missed several contracts while recovering.

The border towns were especially strong for him. Mexicali, Suarez and Tijuana were places where he did well,  but Nogales was the scene of some of his best showings. In November of 1976, he appeared alongside the American, Diego O" Bolger, cutting four ears and a tail for his labor 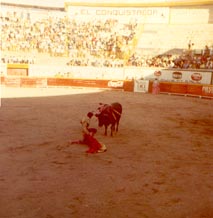 .
Other plazas where he triumphed in one form or another include Queretaro, Los Mochis, Chihuahua,  San Miguel Allende and Zacatecas.

Upon retirement, he became a manager for a comedy team of midget toreros. Afterward, he assisted several relatives to enter the bullring, most notably his nephew, Oscar San Roman.
Posted by Blog taurino at 10:15 AM