Mario Mora of Torreon, Mexico, is a charismatic matador de toros, known for his capacity with the kill and for artistic muleta work. Like Ricardo Castro and other notable matadores form this town, Mora has been making a name for himself in the Mexican rings.

Mora too the alternativa some years back in Torreon at the hands of Frederico Pissarro and Jorge Mora. He has since firmly established himself in his native town.

Mora also made it as far as Peru a few temporadas back and looked favorable there in the eyes of the aficion, while alternating with and surpassing the regional Peruvian toreros,

Mora received his most serious goring in the pueblo of Actopan, where he took a large leg goring. The wound had two deep trajectories and was considered to be major, being both large and deep.

Arguably, one of Mora's greatest triumphs came in the small town of Torokuna . Though he cut only one ear, He outdid both of his associates on the card, who cut nothing and gave one of the best faenas of his career. He was the only performer of the afternoon to win an award and while the single ar may seem unflattering, it was well earned.

While carrying on the tradition of the toreros form the past from Torreon, Mora may well be both the face of the present and the future. 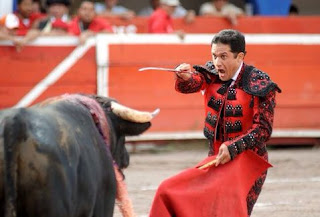