Cristian Aparicio is a fiery Mexican torero who ahs come a long wa since making his debut in  Xochimilco several years ago.

Aparicio ahs made a name for himself in México  as a skilled and artistic performer, known for his ability with both the capote and muleta. He is also better than average with the sword. He has built a following both within the interior and on the Mexican border, with  note to Tijuana, where his brand of performing thrilled the aficion form both sides of the Mexican/American line.

Aparicio was born in Mexico City and still resides there. .

He is no relation tot he bullfighting Aparicio family from Spain. 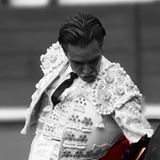