Tom Lea arguably wrote one of the best bullfighting novels in English with The Brave Bulls,  with the account of fictional matadores Luis & Pepe Bello having an historic bullfight in the equally fictional Cuenca, Mexico. The 1951 film form his novels has survived the test of time as well.

Mel Ferrer makes a somber Luis Bello, a figura who loses his nerve after a goring and Eugene Iglesias of Puerto Rico plays the younger brother, Pepe, hot to make it on his own, but in the shadow of his famous kin.  Add the ill fated Miraslava as the love interest and Anthony Quinn as Fuentes, an unscrupulous manager and you have quite a cast.  Real life banderilleros and picadors such as Pancho Balderas and Vicente Cardenas make up the cuadrillas. Rafael Rodriguez was one of the stand in toreros who did the actual fighting scenes.

Whether the movie is out on dvd or not is anyone's guess , but the movie still makes the rounds on late night tv.

The movie follows the book fairly well. A shifty empresario mouths off that he has Luis Bello under contract for a regional feria when he has nothing of the kind and then must act upon his boast. Luis agrees to appear in Cuenca if his brother is on the card as well. The end result, after many mishaps, is a great corrida that sees both men gored, but triumphant. The book is if course superior to the film, butt hen, most books are.

Ferrer and Iglesias play their matador counterparts just as the book intended them. the former is dry, insecure of his own self until a bull named Brujo draws the best out of him a la a Cagancho or Procuna and Iglesias I perfect as the hungry young torero eager to make a name or himself on his own. 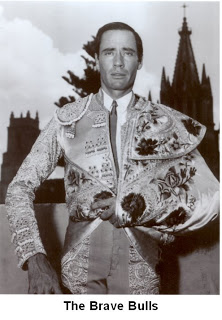