The Death Of El Tio

For the first time in the passing of many years there has been a professional death this  year though scarcely covered by the media due to the obscurity of the torero and the location.

The portly novillero Santos Gaspar "El Tio" of the state of Yucatan, mexico, known exclusive Mexican state following a disastrous goring in one of the pueblos.

While trying to   place a pair of banderillas in a difficult bull, the unfortunate torero received a major goring in the side and lung, which took his life a short time later. 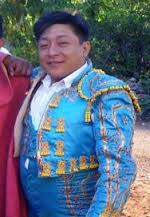