The bloodless bullfights in California have proved triumphant for a number of matadores and novilleros on foot from Portugal. In the past, Antonio Portugal and Manolo Moreno ruled supreme.

On the contemporary scene, Diego Dos Santos has emerged as a new star on foo, looking impressive in particular for his work with the muleta.


In his native Portugal, Diego Dos Santos is already considered by many to be the best Portuguese matador on foot. He also has seen triumphs in Spain and South America, where he has become recognized not just for muletazos, but for work with the banderillas and capote. He is also an outstanding killer, which has long been a weak point with the Portuguese, for the bulls are not killed in the ring there.

In the unorthodox bloodless bullfights held in California, Dos Santos has established great cartel this temporada and continues to constantly draw new fans. 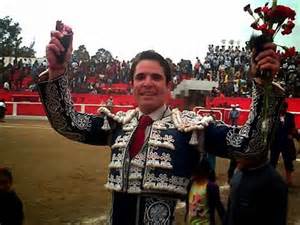