The Tragedy Of Zorro 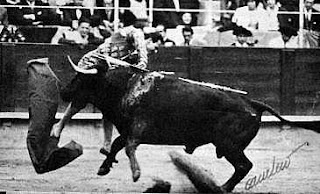 El Zorro did not live long enough to become a legendary matador such as Manolete, Joselito, Cordobes, Orodnez or Dominguin. In fact, he did not live long enough to take the alternativa. During his short career, he seemed brave enough and was especially good with the sword, but hiow far he might have gone would be anyone's guess. He was just not given the time and luck ran out for him.

It was on May 25,1958 that a large crowd was on hand in Barcelona to see the bulls of Spanish matador, Pepe Luis Vazquez make their debut for the first time.  This, rather than the novilleros contracted to face them,  evidently proved to be the true drawing power of the cartel.

Zorro was his usuual brave self, though the animals clearly presented a challenge to him. He tried his best, mustrering applause with both capote and muelta, but did not manage to put together anything that would have been considered a major triumph. Thus, he gave up and aimed with the sword, which was after all, one of his strong points.

The actual thrust looked perfect at first, for Zorro embedded the blade to the hilt, but it was at that moment he was lifted off his feet and the crowd knew something was wrong. 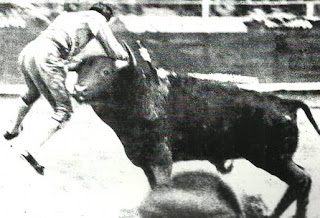 He took a routine tossing. There was nothing spectacular about it and he was not hurled through the air like a gigantic bird. He did, however, get hooked in the abdomenal area, with the horn penetrating his intestines. He was lifted high off his feet and unceremoneously dropped. That was all there was to it.

Likewise, thoguh the wound appeared serious, it did not look to be fatal in the eyes of the fans. They did not see the terror in the faces of the medics when the unfortunate novillero reached the operating table and it became evident just how critically he had been hurt.

Zorro died half an hour after being hooked by his novillo. His injuries were so extensive, there was little to be done excpet watch him slip away in the infirmary.

Thus died a willing and ambitious torero who showed much potential. Instead of leaving in triumph on the shoulders of the crowd that day, he left on a stretcher with a sheet over his face.

Zorro went from the sands of the Barcelona bullring itno the history books.

His real anme was Rafael Martin Vinara and he was born in the province of Ciudad Real in 1931. 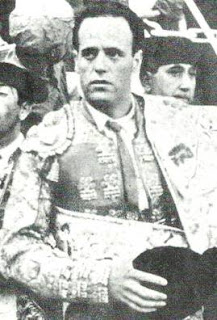