On August 27, 1916, a bizarre double header took place in Spain, where two novilleros were killed the same day.

Antonio Carpio was killed by a bull from Rivas in Astorga as he went in for the kill and took a massive leg wound.

Gorings were nothing new to Carpio, as an admirer and imitator of Juan Belmonte, but this go of things he bit off more than he could chew.

On the same afternoon, another young novillero, Andres Gallego, took a minor wound in the abdomen while working with the capote in La Coruna.

Medics did not diagnose the injury properly, figuring it only to be a puntazo. The torero was bandaged and he returned to his hotel room to rest.

Kare that evening the torero complained of massive intestinal pains. Too late it was discovered he had been hurt worse than expected. Rupturing inside, he fell victim to peritonitis and thsi ebign an era before the advent of antibiotics such as penicillin, he died.

This afternoon in August would have to go down as one of the bloodiest in bullfighting history. 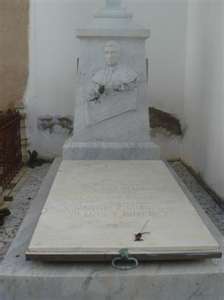 Carpio rests amid a fancy stone in Valencia. No one seems sure where Gallego was buried.
Posted by Blog taurino at 5:18 PM