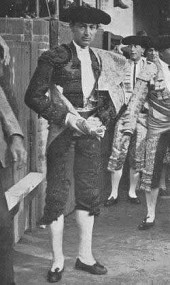 The son and brother of bullfighters, Jose Gomez "Gallito" or "Joselito" or "Joselito El Gallo" was one of the greatest toreros of all time, by whatever name he was or is called. Complete and chariosmatcio in all aprts of the bullfight, he was so masterful he never received a major goring until the one that killed him. Many contend it was not the horn wound itself, but the shock at seeing himself so badly injured that caused fatal trauma to set in. Had he received such a wound in modern times he most likely would have survived.

On May 16, 1920 in the town of Talavera De La Reina, Gallito appeared with his brother -in-law, Ignacio Sanchez Mejias, facing bulls of the Vda. De Ortega herd. The animals offered nothing and even the great Gallito could only manage mild applause.

The fifth bull of the day, named Bailador, was a small toro and had a visual defect. It was for one unfortuante monent Gallito forgot or ignored this while working with the muleta and positioning the beast for the kill, that he was hooked in the abdomen. More liekly than not, the bull never even saw the target it horned.

Trying to rise on the sand, Gallito held back his escaping intestines with his hands. Giving a look of utter horror. it wa sevident he was stunned any bull could have done this to him. He screamed the name of a famous horn wound specialist as he was being carried to the infirmary and evidently never lost conscious from the pioint of being injrued until he died some twenty minutes later.

"Mother, I am smothering," he cried out to his deceased mother on the operating table as medics prepared to do what they could to treat the wound. It was at that point he passed into the history books.

The bullfight world found it hard to believe this master of the arena was dead. When told by phone that Gallito had died, Juan Belmonte thought he was the victim of a sick practical joke. It was only two calls later from others that reality set in.

"I cried as never before," Belmotne would confess to the press.

A vest of red silk and gold spangles worn on the day of his death may be seen in the Museo Taurino in Madrid.
Posted by Blog taurino at 10:03 AM