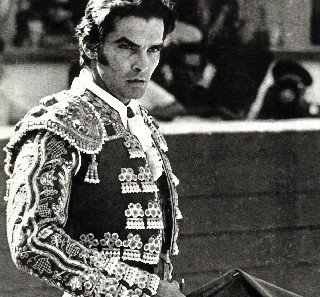 Antonio Lomelin was one of the most complex individuals to ever enter the Mexican bullrings. Talented, but often gored, he was one of the bravest of the brave in front of the bulls, but his life outside the plaza was plagued with scandal and brushes with the law. Hus life ended traumatically, neither by natural causes or on the horns of a bull, but in his home, where he was found dead with a gun in his hand.

Born in Acapulco, Lomelin first attracted attention as a novice due to his stunning work with the banderillas, and better than average skills with the muleta, which he of course improved upon as a matador de toros. A series of initial triumphs at the La Aurora ring in Mexico City in the early 1960s indicated great things to come.

As a novillero, however, he also started receiving some of the first of many gorings that would physically take a toll on him, In 1965, he was gored badly in the groin in Puebla and again in nearly the same part of the same leg in Monterrey a year later. In 1967, he took yet another  major goring in Plaza Mexico while placing banderillas. Yet when he managed to stay off the horns, he was busy amassing an army of fans and a string of triumphs bullrings large and small.

In 1967, Lomelin took the alternativa in Irapuato at the hands of Manuel Capetillo and Joselito Huerta, facing animals of Rancho Seco.

The ritual was confirmed in Plaza Mexico and in Madrid.

One of Lomelin's early triumphs as a matador and perhaps one pf the greatest showings of his life  wpuld  come in the border town of Nogales in 1968. Alternating with El Queretano and Ricardo Castro, he cut ears and tail of both bulls.

Though he would become a regular in Tijuana and score many triumphant afternoons there, he would also receive one of the worst gorings of his carer, when placing the sticks in a  1971 corrida. As he turned to escape the bull, he was hooked from behind and gored in the back, with damage to the liver. In spite of this, he not only lived, but returned to action in short order.

In 1975, he would receive an equally horrendous goring in the intestines while placing banderillas in Plaza Mexico.

This was to be a repeated story throughout his life. Goring after goring, but triumph after triumph in between. He excelled with capote, banderillas, muleta and sword.

Juarez was another city that embraced him, as noted. In the Plaza Monumental he offered many outstanding faenas, while sharing the bill with Cavazos, Gabriel Soto, Finito and other worthy alternates.

Sadly, he could not keep his personal demons under control. The less said about this the better. Then the tragic ending.