Jose Rodriguez "Bebe Chico" was born in Cordoba, Spain in 1870 and spent a career as a capable, but modest bullfigther..

Like many olden day toreros, Bebe Chico spent several seasons traveling in the cuadrilla of established matadores to learn the profession, before embarking on his own as a novillero.

Bebe Chico took the alternativa in Madrid in 1900 at the hands of Minuto. In this corrida, Minuto received a serious goring, which dampened the entire affair.

Bebe Chico contineud as a matador for varied seasons and decided to become a banderillero, working for other men. Among those he served was a fellow Cordoban known as Manolete, who was the father of the famed torero of the same nickname.

Though never a graet matador, he left his mark on the profession. 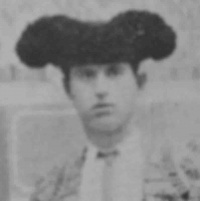