With a bloodline like his, it is no wonder the new novillero Garza Gaona is finding such success.

The grandson of Lorenzo Garza and the great grandson of Rodolfo Gaona has created an interesting heritage for this fiery new torero.

The 2011 season saw him taking Mexico by storm and there are indications even greaster things will be in store for him in 2012. 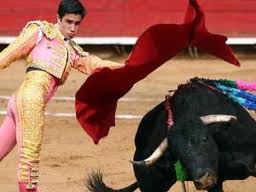 Garza Gaona has left a lasting impression upon aficionados from Mexico City to the pueblos. He has especially shown talent for the big capote where making other things he has a natural connection to the gaonera pass.

The 2012 season could well be the year of Garza Gaona. 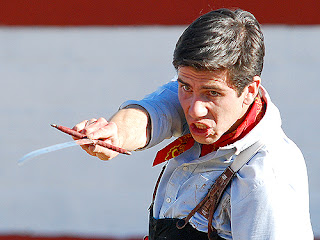 Posted by Blog taurino at 10:26 AM No comments:

Guillermo Alban might well go down in history as Ecuador's greatest torero. While this country has been known for holding great ferias and corridas, it has not produced that many matadores, though there have been some good ones in the past. Alban, however, might stand above them all.

Born in 1971, Alban first started making a name for himself in the Mexican palzas where he went to campaign in the early 1990s. The year, 1993, was tremendous for him and he received much favorable acclaim. During the next few seasons he continued to shift between Mexican soil and South America, then toured Spain for the first time in 1996. He again gained ground as a fiery performer and saw repeated trips to Spanish plazas.

Alban took the alternativa in Quito in 1999, at the hands of El Juli.

As a matador de toros, his reputation continued to expand even beyond that of his long career as a novillero. He received bookings around the globe and triumphed in the large rings as well as the small.

In 2003, he confirmed  his alternativa in Madrid at the height of yet another successful Spanish tour.

In the years that followed, he built up his fan base, though some of his greatest showings in recent seasons have been back in the South American plazas. Maracay, Venezuela, served as a scene for some spectacular faenas. Quito likewise became a stronghold for him.

There are also many You Tube clips and web pages online carrying information on him and his career.

Posted by Blog taurino at 5:40 AM No comments: