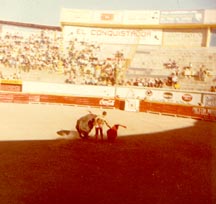 Coming from Salamanca, Spain, Paco Pallares gained great reviews and raves as a novillero, with triumphs in both Madrid and Barcelona as well as smaller plazas to his credit. He was especially emotional with the muleta and decent with the steel.

Some critics contend his career was hampered by a major goring in the neck in 1966. 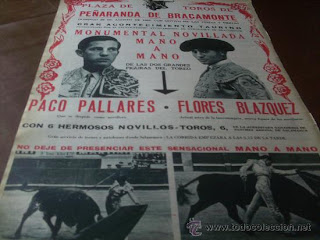 In any case, Pallares continued to strive onward in his chosen profession, but would find greater success in Mexico after taking the alternativa.

Nogales became a scene of varied triumphs. In May of 1971, he and Arturo  Ruiz Loredo faced bulls of Gustavo Alvarez. Both men failed miserably with their first animals, but then cut ears from their final bests of the day. Gaining a return contract, Pallares repeated alongside Raul Garcia in July of that year, alternating with Raul Garcia to face bulls of El Romeral. Garcia cut an ear and Pallares cut ears and tail, while facing the final bull of the day in a tremendous thunderstorm. Sopping wet and trudging across a sea of mud, The Spaniard made a dramatic figure, squaring off with both the bull and the elements to give the faena of a lifetime.

In 1972, Pallares came back to Nogales to alternate with Jesus Solorzano to face bulls of Milpillas.  He took a vuelta form his first bull of the day and cut an ear from his third, which was a sobrero for a bull he fought second and broke a leg.

His presentation in Tijuana, alongside Jaime Rangel and Alejandro  Otero, however, did not go so well.  He  could only manage a few decent muleta passes with difficult bulls and received mild applause at best.

Upon returning to Spain, Pallares retired but remained involved in bullfighting as a bull breeder, promoter and manager. He was still involved with various elements of the bullfight and in other businesses at the time of his death.

His son also entered the bullring as a torero.
Posted by Blog taurino at 5:39 PM