Humberto Moo was a beloved Mexican matador in the 1950s and 1960s, sating farewell to the bulls in 1970. When active, he was known as The Man With Left Arm Of Gold for his tendency to link many flowing natural passes in his faenas.

Moro also survived one of the worst nonfatal gorings in Mexican history, when he took a nightmarish horn wound in the pueblo of Xico in the summer of 1960. To put it nicely, the horn destroyed his private parts, but the miracle of modern medicine restored him not only to life, but fatherhood.

Moro was especially popular in the border towns of Tijuana and Juarez, where he received many contracts and saw many triumphant afternoons. he was also popular in his residential town of Aguascalientes within the interior, as well as san Luis Potosi, Guadalajara and otter major rings.  Born in Linares, Mexico in 1929, he took the alternativa in Plaza Mexico in 1951 at the hands of Manolo Dos Santos and Jesus Cordoba.  Aside from a lengthy career in Mexico, he made appearance sin many South American plazas. 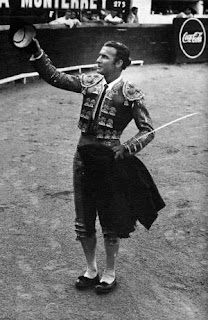